There’s been a slew of great statistics released recently in the mobile app realm that made us do a double take. We wanted to highlight a few interesting articles that made us think, or rethink, how mobile apps have evolved over the recent years.

We think of Mobile as being a young industry and each year we’d see big changes in the status quo due to new technologies, new ideas, and new players. But the recent report by comScore revealed that the top 25 apps in the US barely changed year over year. 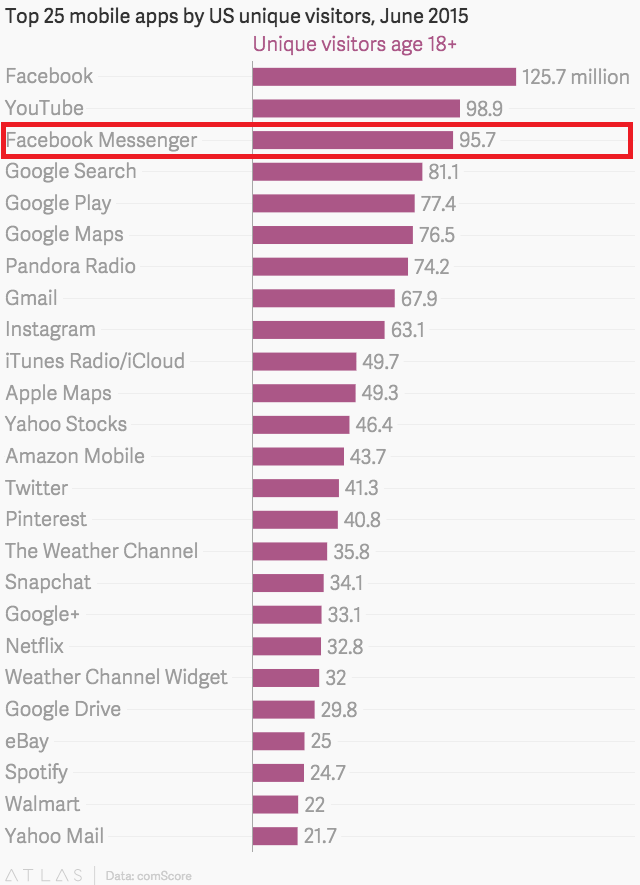 In fact, 21 of these apps were in the top 25 last year. This tells us that as the industry matures, it’s going to get a lot tougher for game-changing apps to enter the fray, especially smaller companies since mega-corporations like Facebook and Google dominate the charts.
Other insights: 1) The biggest climber was Facebook’s Messenger, revealing once again how important communication is to stickiness in today’s mobile atmosphere. This app was reviled by Facebook users when it debuted (for splitting off from the main app to a stand alone), but it was clearly the right decision. 2) A terrible, broken, poorly designed app like Yahoo Mail can still be in the top 25 simply due to legacy users. Mind blowing, but shows that if you can lock people into an ecosystem off mobile, they’ll follow (however reluctantly) on their smartphones as well.

You’d think it’s pretty clear that Facebook is for a younger generation than LinkedIn, and anyone who is serious about climbing the corporate ladder is on the latter. But the recent numbers from Pew show a different story that surprised us. 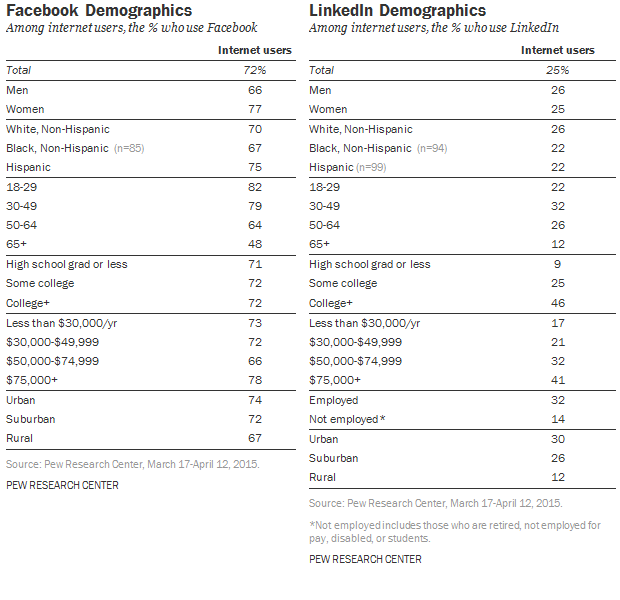 78% of internet users who earn more than $75k are on Facebook while only 41% are on LinkedIn. Is that surprising to anyone else? Sure, this is a result of Facebook just having more users, but you would have thought the discrepancy was much closer. Considering this also takes into account mobile app usage, it shows that advertising on Facebook will probably reach more high earners than advertising on LinkedIn. This has some serious implications of where to allocate your mobile advertising dollars in the coming year.

3. India is a Huge Mobile Opportunity

We all know that mobile is big business outside of the US, but the latest numbers out of India were impressive to say the least. According to the recent Apps India conference, the average mobile app usage there has grown 131%, outpacing the rest of the world. The Washington Times also got a great quote that highlights why India is so gung-ho about mobile:
“Almost nothing else matters to us (Indians). This (the mobile app) is the most significant way for Indians to access e-commerce. Most of our users will never see a laptop. Last year, this has been the most fundamental shift in the industry from one platform to another,” said Punit Soni, chief product officer at Flipkart, which currently gets 75% of its traffic through its mobile apps.
It’s clear eCommerce companies can’t ignore the mobile element if they want to reach Indian (and other international) shoppers, but these growth numbers tell us that these companies better work on international apps sooner than later. Before long, the market will get too crowded and the bonus of being first on the scene is going to be lost.

This is a crazy stat coming from a recent TechCrunch article. Is your mind blown? It should be. Deep linking, basically linking to specific content within an app and not just the home screen of the app, is usually treated as an afterthought. Little did we realize just how much of a positive user experience it can be when done right. To double retention rates is huge, and it means all mobile app developers should heavily factor in deep linking into the design of the app, specifically “contextual deep-linking” which can use user data to show relevant information when the app is opened for the very first time, which immediately gives a great user experience from the get-go.
What do you think of these recent stats in the world of mobile apps? Sound off in the comments below!

Got a new business venture?