4 Reasons to Update Your App Every 2 Weeks

April 30, 2015
The Rocket Farm Team
When Mike Beltzner, mobile product lead for Pinterest, was asked why the app puts out a new version every three weeks, he had this response:
“Because I got pushback when I tried for two? That’s the honest answer.”
Fantastic answer, isn’t it? Beltzner knows how important it is to keep his app refreshed in today’s environment where a million apps compete for a tiny piece of everyone’s home screen real estate.
How often do you update your app? Once a month? Every other month? If so, your company may be missing out on the benefits of releasing frequent versions. In the mobile industry, two week “sprints” is becoming the standard for development teams. Here are four reasons why you might want to update your app every two weeks.

1. It’s good for the customer.

According to a report by BI Intelligence, across 2013 and 2014, frequently updated apps received generally higher ratings. In fact, “no app earned above-average ratings with less than 9 updates in the year.” Clearly, customers want and appreciate apps that update regularly. Check out this chart mapping ratings to frequency of updates: As you can see, there is a clear correlation between slow updates and lower ratings, and rapid updates and higher ratings from these big name brands. Your users will vote with their fingers as they rate your app on the Google or Apple app stores, and they aren’t shy about giving one-star ratings if things break or function poorly. Answering user complaints with quick updates is the best form of customer service your app company can provide.

2. It’s good for your company.

Beltzner hits on a great reason why releasing updates quickly benefits your team: a shorter cycle leads to less breakage. At Pinterest, their 3-week cycle means they only change small pieces of code each time. “The risk of any one code change is smaller, so you can innovate faster with less risk.” Longer cycles mean bigger releases, which could lead to much bigger problems if something breaks.

This not only keep your team more agile, but also bakes in another good philosophy for your team to have: fail faster. Smaller mistakes mean it’s not the end of the world, so it’s good to make those mistakes quickly and iterate on them just as quick. Your developers will see what works and what doesn’t faster, especially since 44% of app defects are found by the user. By getting the updates into the hands of your users every two weeks, your team benefits from finding little bugs that don’t destroy user experience.

3. It’s what your competition is doing.

SensorTower found that the average cycle between updates for the top 25 iOS apps is around 30 days. That means half of them have even shorter cycles, closer to 2 and 3 weeks, for companies ranging from Twitter to Candy Crush: 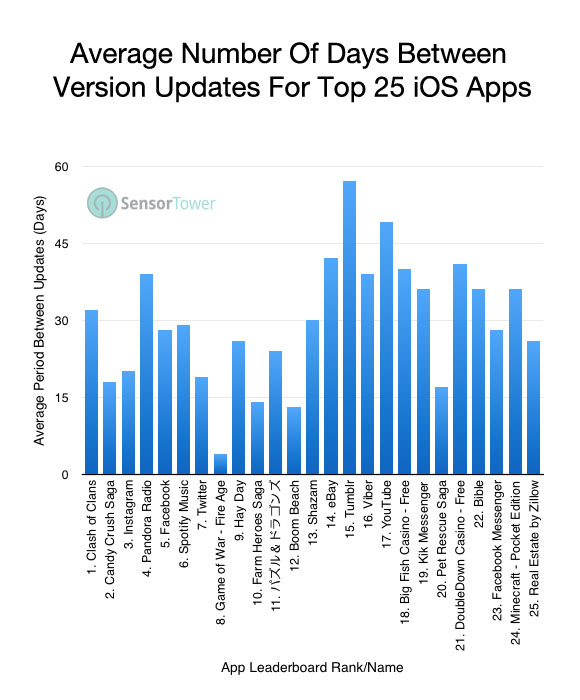 We’re not kidding when we say that these development sprints are the norm. To keep up with your peers and competition, your team has to iterate quickly or risk getting left behind.

4. It helps your app stay top-of-mind.

Finally, regular app updates have the added benefit of reminding infrequent users that your app is right there waiting to be opened. Updates can be another way to “push notification” in a gentle, non-intrusive way to your audience. Many brands do this to stay top of mind, especially if users know that an updates comes with a new feature or new content.

Facebook Messenger is a great example of this. Nearly every time Facebook Messenger updates, and it updates frequently, it comes with either a new feature or at least another of its popular sticker packs that users love. For many, an icon indicating an update to Messenger on the corner of their phone means new stickers, which is enough to get them to open the app. A great way to stay top-of-mind.
How often do you update your app? 2 weeks is a great goal, but we’ll let you slide with 3.
For more insights into the mobile app industry, follow our Twitter,Facebook, LinkedIn or RSS feeds.

The Rise of Apps on Television